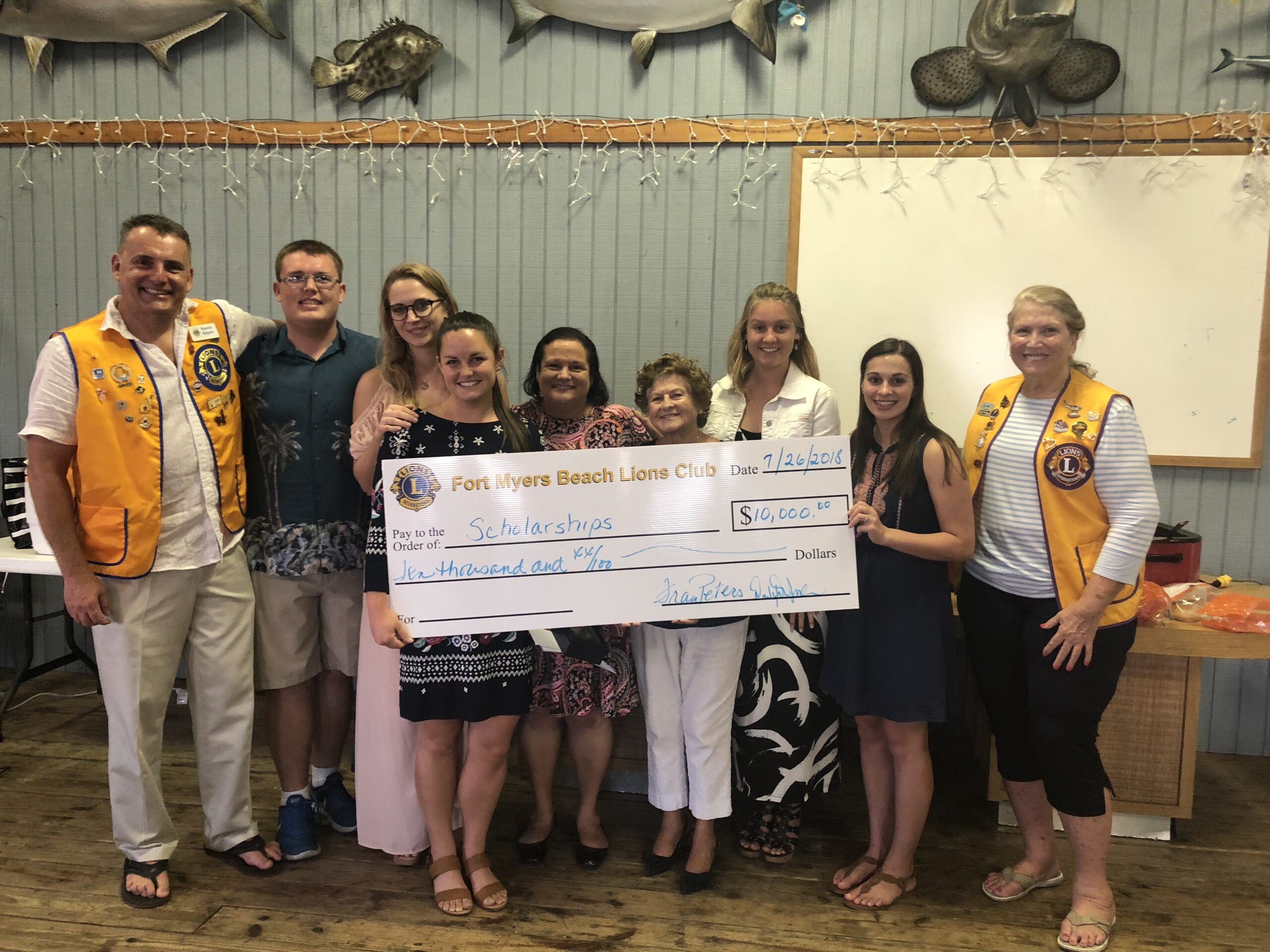 The “WE SERVE” Scholarship is awarded annually to deserving students who wish to further their education. Applications are available in the spring of each year for next year’s contestants.

The moral of this tale is that when men and women have good hearts, good things will happen. Sometimes though, the outcomes are not the ones planned on.

This little story begins in a Lions club meeting  held at the Ft Myers Beach Moose Club on San Carlos Blv. on a mild spring evening in 1989.  One of our members stood up to give a report on the status of what was to be the Lions Clubhouse building planned to be completed on Pine Ridge Road.  Former Lion and Mayor Bill  Van Duzer stood and explained this project’s fate.  Our club owned some land on Pine Ridge. An old structure that was slated to be torn down was donated to the club for remodeling if our club would pay the $5,000 it cost to move it there.  With the dream of having a permanent clubhouse everyone had cheerfully agreed to do it!

Except, Lion Bill continued,  some vandals decided it would be great fun to break in, party and wreck the building.  And now, the county was complaining that the ruins were a hazard that Lions would have to remove the building at members expense or be cited and fined.  Needless to say that vote was unanimous.  So the fire department offered to burn it down for practice.

We now had an empty lot and were out $5,000 for moving the building as well.

To make a long story shorter,  the board decided that the dream of a clubhouse was not as much for the community we serve as it would be for ourselves. The board wisely voted to sell the now vacant land, and when it sold the board would decide what we would do with the funds.

After awhile the land sold and several options were brainstormed at a board meeting in one of the members homes right here on the island. As it happened, one idea I tossed out was to set up a Scholarship fund for local kids to help with their college costs.  The chair of our scholarship fund then and today was also a board member and president back 20+ years ago.  I remember seeing Lion Darby Doerzbacher’s eyes light up as she thought about an exciting new service project for our club.  All of the money raised for the failed clubhouse came from our members and not from any public fund raising projects.  This club voted to donate our club money to our Beach Lions Foundation for a scholarship fund. The idea passed unanimously.

Today We Serve scholarships have paid out  more than $100,000 to our deserving local students.  Each year funds earned from our Shrimp Festival continue to be added to that scholarship fund.

The original idea of the scholarship fund was to never spend the funds put in,  but only the earnings from the funds investments.  This means that the funds that were given years before our current scholarship winners were born, are still there earning dividends to be used for scholarships now and into the future. We Beach Lions hope that your children, and your children’s children will also receive a scholarship from the Fort Myers Beach Lions ‘We Serve’ Scholarship Fund!

To me, This is a Pay It Forward Project.  So, we Lions ask that, as you go through life,  you consider making a payment of your service to your community in some way, for the benefit of others.  Of course we would love you to become Lions and serve the community. You now know one more way we Lions serve our community, and how good hearts make good things happen.

The Lions meet at the Parrish Hall on Williams Drive on the 4th Thursday of each month at 6:30pm (but check the calendar to see if a specific meeting is scheduled by clicking here). Call Lion President Shelby at (239) 451-3425 for more information. Proceeds of Lions activities, such as the annual Fort Myers Beach Shrimp Festival weekend, help fund student scholarships and many more local needs. For information about joining the Lions call Lion Bernard at (317) 627-4025 or send an email to [email protected].

The 2023 Shrimp Festival Planning is Underway! Click HERE to get involved. Dismiss